Alexsarah “Golden” Collier … is the sole proprietor of Diasporan Savant Press, an independent publisher focusing on exploring global blackness and marginalized voices within the African diaspora, including, but not limited to, those of women, trans folks, youth, and the lgtbqia community.  With an emphasis on multidisciplinary works, DS Press’ current catalog explores dimensions of printmaking (digital, screenprint/silkscreen, gocco, blockprint, monoprint), art books, zines, textile art and more, all while cultivating a lively conversation between contemporary and ancestral diasporic wisdoms. 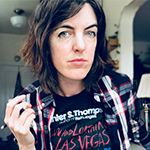 Jamaica Dyer … is an artist and writer living in Oakland, who creates underground painted comics, published in places such as Heavy Metal Magazine, i-D, Spiralbound on Medium, SPIN, Image Comics, SlaveLabor Graphics, Dark Horse and others. She is the creator of the award-winning comic series “Mixtape” and also is I’m a designer, artist and storyteller specializing in UI/UX design, creative direction, and motion design. Dyer won the Best Minicomic Award for “Mixtape #2” at the 2018 Dinky’s — an annual competition to recognize excellence, promote independent comics from a diversified group and create a level playing field in which work is judged for its merits, not the strength of its marketing campaign.